Givaudan’s vision for truly enterprise wide content management is well on the way to being realized. Finance, Legal, HR, Production, Research, IT and many more are accessing our corporate taxonomy, meaning finding information is far easier than ever before.

Givaudan employs over 9,000 staff in more than 40 countries at 80 sites and is one of Switzerland’s top 30 companies in terms of market capitalization.

A great deal of information content, both physical and electronic, is generated in the development, testing, manufacture and supply of Givaudan products. Keeping track of the multitude of documents and data, ensuring that record keeping practices are adhered to and that information can be quickly and easily located is a monumental task. Over the years, Givaudan has used a variety of systems to meet its needs, including mainframes, each with their own support and maintenance costs. Business process automation plays a key part in keeping the business running, and Givaudan was confident that a better way of working was possible.

Givaudan had already undertaken a global, strategic project to standardize and consolidate multiple IT systems into a single enterprise-wide SAP® system. This works well for structured content, but there was no similar strategy in place for unstructured content documents, scanned images, reports, etc. Having grown both organically and through acquisition, there was a multiplicity of systems, processes and procedures throughout the organization. These led to various approaches and solutions for creating, capturing, storing, managing and ultimately disposing of documentation.

This was causing a number of challenges including difficulty in collaboration within and across teams, often in different geographies. Information reporting and exchange was difficult at best. Searching was often slow and unreliable, with users unable to fully trust results, unsure if they were looking at the very latest version of a document. The growth of tools such as email only exacerbated the problem, with content being circulated, uncontrolled, as attachments, placing pressure on storage infrastructure, too.

Givaudan set out to develop a global strategy for content management, one that would deliver on the goal of a single source of accurate information, so users could have confidence in the content they were sharing. This strategy would encourage, rather than hinder, collaboration on a global scale ultimately leading to significant cost savings through consolidation of systems and also a reduction in support and maintenance costs. This included a significant reduction in the reliance on three Mainframe systems–which would eventually be decommissioned, saving millions of Swiss Francs every year.

Selecting the right partner for the long term

Givaudan recognized that implementing the dramatic changes of a new, single, enterprise-wide content management strategy would require a solid, reliable and proven solution provider. Certain criteria that had been defined by Givaudan reduced the number of potential organizations and Givaudan very much wanted the relationship to be partnership based rather than the traditional supplier-client setup.

Having already implemented the OpenText solution for SAP content archiving, Givaudan explored the ability of OpenText to deliver against their broader requirements. Key factors for Givaudan included the completeness of the OpenText Enterprise Information Management vision covering everything from document and data capture, to collaboration, to records management and web experience. Integration between SAP and OpenText Content Server and the length of time that OpenText has been providing such solutions were also key factors. Givaudan looked to the Gartner Magic Quadrant and evaluated a number of standout players in the market, but OpenText ultimately won the competitive bid process. 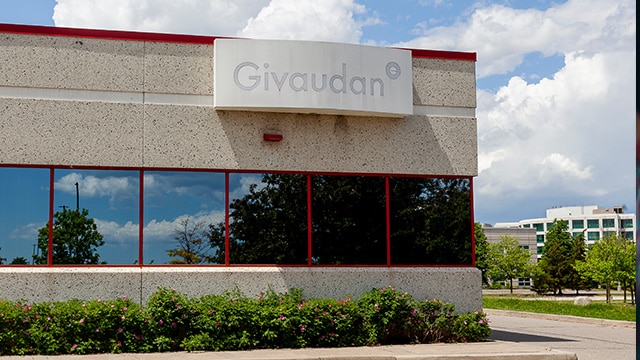 With so much content, of different types across more than 40 countries, OpenText helps us meet the demands of the various regulatory and legislative bodies.

Building an in-house team, from proof of concept to production

Initially, a proof of concept project was implemented to test the capabilities of OpenText Content Server against the requirements of Givaudan. An internal team was put together to work with both OpenText and additional external resources to build knowledge and skills in-house. This team, the ECM Competence Center, worked on the proof of concept and has since taken on responsibility for the roll out and support of OpenText to Givaudan’s current user base of over 9,000 users worldwide.

A number of areas at Givaudan were singled out for the initial phases of testing and roll-out, and these have significantly extended over time. Marie Elise Mortiniera, Collaboration & Social Networking Manager at Givaudan, said, “For example, OpenText Communities of Practice is being used by the whole of the Flavors Creation team. They are using the wiki style capabilities to capture and share knowledge across the globe, enabling much greater collaboration.”

Also, Givaudan’s Quality department use OpenText as a central repository and leverage the workflow capabilities for document review, approval and publication across all Givaudan’s ISO-certified sites around the globe.

Givaudan’s internal IT teams use OpenText to manage all IT project documentation in ordered and structured folders, with sophisticated search capabilities. There is also a thriving Community of Practice for sharing Givaudan’s globally standardized IT project methodology throughout the organization.

Plans are in place for other innovative uses of the OpenText solution. For example, at production facilities where workers do not have their own computer desktop, kiosks will be rolled out where staff can access information, check documents, submit updates, etc. using their own unique ID, thereby preserving the overall audit trail consistent with Givaudan’s global security and audit policies. “Givaudan’s vision for truly enterprise wide content management is well on the way to being realized. Finance, Legal, HR, Production, Research, IT and many more are accessing our corporate taxonomy, meaning finding information is far easier than ever before,” commented Xavier Ansiaux, Givaudan’s ECM & Social Collaboration Competence Centre Manager.

Streamlining from the top down

Givaudan set out to deliver a single source of accurate information for all documentation and OpenText is helping to achieve this goal. But it isn’t just about document management, workflow is a key part of the streamlining process and here too, OpenText is making a difference.

Processes that rely on access to content are perfect for optimization. Whether that’s an approval process, with links to the draft documents being sent via email, thus reducing the burden on email servers and also ensuring that all users are accessing the very latest version, or a record retention or disposal process, OpenText is providing the necessary capability.

Implementing such changes can cause user inertia, with users not warming to the new approaches. Givaudan has taken steps to ensure that this has not been the case. Education programs were put in place to socialize forthcoming changes, pointing out not only the benefits for the company but also to individuals. Being able to quickly locate documentation and being able to rely on results as being up to date and accurate, with content available from wherever users may be, all adds up to a high user adoption rate. Access from mobile devices, such as smart phones and tablets make life easier for users too.

Givaudan senior management, right up to Board level, is leading the way. “Having a top down approach has helped us achieve greater user adoption, with the Board using the system, usage has permeated out to all parts of the organization,” added Xavier Ansiaux.

The search capabilities of OpenText are truly extensive now we have both historic and current information stored together.

Working in the fields of Flavors and Fragrances, means that Givaudan is subject to a plethora of regulations and compliances, with regional and national variations. From quality control standards, data protection, record keeping requirements and more, Givaudan is using OpenText to help meet its various obligations

“With so much content, of different types across more than 40 countries, OpenText helps us meet the demands of the various regulatory and legislative bodies. From specific food and manufacturing record keeping to more general corporate governance, OpenText eases the burden significantly,” said Mike Haywood, Givaudan’s Record Management and Archiving Manager.

To ensure that Givaudan has the complete picture across both structured and unstructured content, the OpenText solution is also used to store historic transactional data in document form in the unstructured repository. This enables a truly complete picture to be built up of a customer, a product or a sale for example. This migration of historic structured data into the document archive has helped facilitate the decommissioning of a number of legacy systems, further reducing costs. By moving this historic or frozen data into OpenText, searches spanning the complete lifecycle of business transactions and associated documentation are now possible for the first time.

“The search capabilities of OpenText are truly extensive now we have both historic and current information stored together. We can filter in many ways such as by date, document type, product, customer, etc. quickly narrowing down a search to the content we need. With content previously held in multiple systems, there was no way to do this prior to OpenText being implemented,” added Mike Haywood.

With many users already active on the OpenText solution, Givaudan is not resting on its laurels. The company is continually looking for further opportunities to innovate, making more efficiency gains, streamlining more processes and eliminating cost through further consolidation and standardization.

A project is under way to implement the latest version of OpenText Content Server and this is expected to provide even greater functionality to Givaudan’s users. Use of records management will be extended to cover other content types than those already under the management of OpenText. Business units will be given the option of how they manage their content depending on its business value: folders can be configured to behave just like Windows-style folders with user control of deletion, or can be a part of a managed record approach with stringent retention and disposal controls applied.

The possibilities are endless for us to build greater value for the business from our relationship with OpenText.

Givaudan is also looking at a number of other areas such as wider access from mobile devices, storage and streaming of video assets, federated search to include any content still managed outside OpenText and deeper integration with SAP. Xavier Ansiaux concluded, “The possibilities are endless for us to build greater value for the business from our relationship with OpenText. We have already moved beyond the supplier-client relationship; this is a partnership and one that is working extremely well.”

Givaudan is the global leader in the fragrance and flavour industry, offering its products to global, regional and local food, beverage, consumer goods and fragrance companies. For more information, visit: www.givaudan.com.