"I am delighted to welcome GXS customers, partners, trading community and employees to OpenText," said OpenText CEO Mark J. Barrenechea. "We are committed to leading Enterprise Information Management with the market's best products and cloud-based services. Our combined cloud will now manage over 16 billion transactions per year, approximately 600,000 trading partners and 40,000 customers."


About the Transaction (1)
OpenText paid $1.065 billion in cash consideration (of which approximately $887.9 million was used to repay outstanding indebtedness of GXS and approximately $29.3 million to pay certain GXS transaction and other related costs), and approximately $53.7 million for the working capital of the business. $60 million of this cash consideration is subject to customary escrow terms and conditions for a period of time post-closing. Pursuant to the merger agreement, OpenText also agreed to issue to the sellers $100 million worth of OpenText common shares based on an average trading-price for the 10 days ended January 14, 2014, but at a price no lower than $69.73 per share and no higher than $77.07 per share. Given the applicable trading average, the shares were issued based on a deemed price of $77.07 per share, resulting in the issuance of 1,297,521 shares, or approximately 2.2% of OpenText's outstanding shares. The aggregate value of these shares, based on the closing share price as traded on NASDAQ on January 15, 2014, was approximately $117.7 million.

The cash portion of the consideration included $265 million of cash on hand and $800 million borrowed under a new term loan facility entered into among Ocelot Merger Sub, Inc., a wholly-owned subsidiary of OpenText which merged into GXS in connection with the acquisition, as borrower, OpenText, as guarantor, certain of its subsidiaries, as guarantors, the lenders named therein, Barclays Bank PLC (Barclays), as sole administrative agent and collateral agent, and with Barclays and RBC Capital Markets as lead arrangers and joint bookrunners. The term loan has a seven year term and is secured by a first lien on substantially all of the combined company assets on a pari passu basis with OpenText's existing credit facility. A portion of the cash consideration in an aggregate amount of $887.9 million was used to repay or redeem, and thereupon terminate, satisfy and/or discharge, outstanding indebtedness of GXS.

The 1,297,521 OpenText common shares were delivered only to GXS preferred stockholders that were verified as accredited investors under the U.S. Securities Act of 1933, as amended, and account for approximately 2.2% of OpenText's outstanding common shares as of January 15, 2014, and, as previously disclosed, the holders of such shares have certain rights under a registration rights agreement with OpenText.

Additional information regarding the closing of the acquisition and related financing is available in OpenText's Current Report on Form 8-K filed with the Securities and Exchange Commission (SEC) on January 16, 2014.

For more information or to listen to the call via web cast, please use the following link: http://investors.opentext.com/events.cfm.

Certain statements in this press release, including statements about the focus of OpenText in its fiscal year beginning on July 1, 2013 and ending June 30, 2014 (Fiscal 2014) on growth in earnings and cash flows, creating value through investments in broader EIM capabilities, distribution, OpenText's presence in the cloud and in growth markets, its financial conditions, results of operations and earnings, declaration of quarterly dividends, and other matters, may contain words such as "anticipates", "expects", "intends", "plans", "believes", "seeks", "estimates", "may", "could", "would", and other similar language and are considered forward-looking statements or information under applicable securities laws. In addition, any information or statements that refer to expectations, beliefs, plans, projections, objectives, performance or other characterizations of future events or circumstances, including any underlying assumptions, are forward-looking, and based on OpenText's current expectations, forecasts and projections about the operating environment, economies and markets in which it operates. Such forward-looking statements involve known and unknown risks, uncertainties and other factors and assumptions that may cause the actual results, performance or achievements to differ materially. Such factors include, but are not limited to: (i) the future performance, financial and otherwise, of OpenText; (ii) the ability of OpenText to bring new products to market and to increase sales; (iii) the strength of OpenText's product development pipeline; (iv) OpenText's growth and profitability prospects; (v) the estimated size and growth prospects of the EIM market; (vi) OpenText's competitive position in the EIM market and its ability to take advantage of future opportunities in this market; (vii) the benefits of OpenText's products to be realized by customers; (viii) the demand for OpenText's product and the extent of deployment of OpenText's products in the EIM marketplace; and (ix) OpenText's financial condition and capital requirements. The risks and uncertainties that may affect forward-looking statements include, but are not limited to: (i) integration of acquisitions and related restructuring efforts, including the quantum of restructuring charges and the timing thereof; (ii) the possibility that OpenText may be unable to meet its future reporting requirements under the Securities Exchange Act of 1934, as amended, and the rules promulgated thereunder; (iii) the risks associated with bringing new products to market; (iv) fluctuations in currency exchange rates; (v) delays in the purchasing decisions of OpenText's customers; (vi) the competition OpenText faces in its industry and/or marketplace; (vii) the possibility of technical, logistical or planning issues in connection with the deployment of OpenText's products or services; (viii) the continuous commitment of OpenText's customers; and (ix) demand for OpenText's products. For additional information with respect to risks and other factors which could occur, see OpenText's Annual Report on Form 10-K, Quarterly Reports on Form 10-Q and other securities filings with the SEC and other securities regulators. Readers are cautioned not to place undue reliance upon any such forward-looking statements, which speak only as of the date made. Unless otherwise required by applicable securities laws, OpenText disclaims any intention or obligation to update or revise any forward-looking statements, whether as a result of new information, future events or otherwise. Non-GAAP Measure

This press release contains GXS' Adjusted EBITDA, a measure that is not in accordance with U.S. GAAP (non-GAAP). This non-GAAP financial measure has certain limitations in that it does not have a standardized meaning and thus GXS' definition may be different from similar non-GAAP financial measures used by other companies and/or analysts and may differ from period to period. Thus it may be more difficult to compare GXS' financial performance to that of other companies. Despite these limitations, GXS believes the provision of Adjusted EBITDA allows investors to evaluate the operational and financial performance of GXS' core business using the same evaluation measures that management uses, and is therefore a useful indication of GXS' performance or expected performance of future operations and facilitates period-to-period comparison of operating performance (although prior performance is not necessarily indicative of future performance). As a result, GXS considers it appropriate and reasonable to provide, in addition to U.S. GAAP measures, Adjusted EBITDA in this press release. The following chart provides (unaudited) reconciliation of Net income (loss) to Adjusted EBITDA for the year ended December 31, 2012: 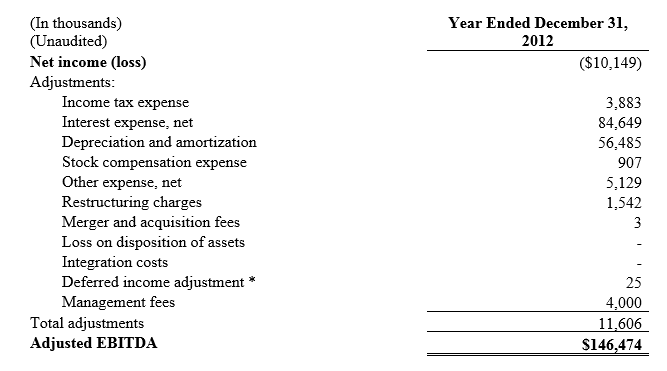 * Purchase accounting requires that deferred income of an acquired business be written down to fair value of the underlying obligations plus associated margin at the date of acquisition.

(1) All dollar amounts in this press release are in U.S. Dollars unless otherwise indicated.