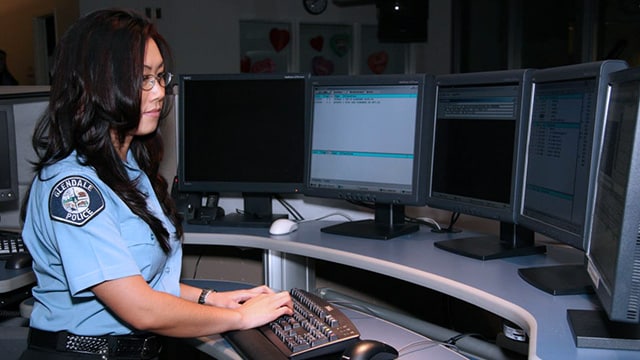 OpenText Brava! reduced the time it takes with each report, which increased our work production and ultimately our efficiency.

When responding to requests, the Glendale PD must first redact sensitive information, including social security numbers, phone numbers and other information, from the police report before releasing it to the public. It must also redact medical information and any specific descriptions of bodily injury in accordance with HIPAA (Health Insurance Portability and Accountability Act) Privacy rules and any crime details considered to be too explicit or graphic for the general public.

With police reports containing so much privacy material and confidential information, the ability to quickly and accurately turn around public requests is a daunting task. As explained by Sgt. Soto, “A typical homicide report could be two, three, four hundred pages long. That’s going to take some time to get through.”

Previously, officers used Microsoft® Word to block out text. “It was taking forever. With our sergeants spending a significant amount of time redacting reports, we wanted to find ways to automate that, make it easier,” Sgt. Soto said. In addition to saving time, the Glendale PD wanted to deploy redaction software that truly redacted content and metadata—not just a highlight that could easily be reversed to reveal text.

Following research, the law enforcement agency chose OpenText™ Brava!™, an electronic tool that safely removes privacy information and sensitive content from virtually any document type, including PDF, TIFF,and Microsoft Word and Excel. Brava! makes it easy to redact all instances of a name, social security number, birthdate, phone number, account number and more. Redactions can be applied simply by dragging a box, searching for text strings or patterns, using predefined block out zones or applying reusable scripts. Brava! then creates fully sanitized TIFF or PDF renditions of the original document for easy distribution—redacted content is actually removed in the output file, not just covered. “In addition to time savings, we now have the security of knowing the document is truly redacted,” said Sgt. Soto.

Speeding up the work cycle, Sgt. Soto estimated Brava! reduced redaction tasks by several hours across the Criminal Investigations Division while it is also used by the public information officer and Records Division. “Accurately redacting reports is a very time consuming job. Efficiency is very important to our agency and Brava! reduced the time it takes with each report, which increased our work production and ultimately our efficiency,” he said.

In addition to time savings, we now have the security of knowing the document is truly redacted.

Following installation of the solution, initial user experience included running a script using known terms and then going back to read the entire report, doing redactions on the fly. If sergeants found additional text to redact, they would click on the “Find & Redact” tool, type in the text and then redact it. Suspecting there might be a way to do this with less clicks, the department approached OpenText.

OpenText listened to questions and concerns, according to Sgt. Soto. “The OpenText team gave us a two-hour training session here at the station. And we sent our homicide sergeant down to the OpenText office. He went through everything in Brava! that he thought would be a benefit to us.”

Based on the police department’s feedback, OpenText created a new “Redact Text” tool. Ideal for a “read and redact” process, it allows a user to select a word, name or phrase to redact and instantly redact all instances throughout the entire report. Sgt. Soto said the new tool shortcuts a few steps, reducing redaction time.

The sergeant commented on OpenText’s responsiveness: “I don’t think we’ve ever had a company do anything like that for us. I’m very impressed with the willingness of OpenText to really look at and see what customer wants and needs are and try to adapt to those.”

The mission of the Glendale Police Department is to protect the lives and property of the people they serve.